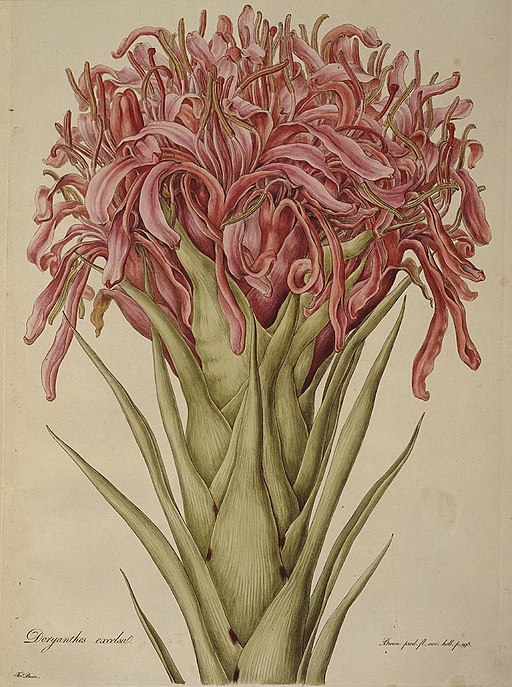 — the wisteria vine like a weight-lifter’s bicep
— young mulberries ready to swell and blacken like a punch in the eye
— beaches clean and inclined like a young girl’s calf
— cylindrical waves as empty as a cupboard
— the horizon like an inverted ashtray
— 4 cranes on a building site tuned like harps
— city noise like a smack on the nose
— diesel fumes thick as frying onions
— a frangipani blossom like an egg custard
— a gymea lily like a penis on the first night: red unruly and swollen with intent
— clover flowers like tea-cozies
—  the mosquito merciless as a line…
— cloud building up like hypoglycaemia
— & the sun breaking through like we should be pleased or what ?

Image:  Doryanthes excelsa (Gymea lily) by Ferdinand Bauer (1760–1826) [Public domain], via Wikimedia Commons. A gymea lily is a flowering plant endemic to coastal areas near Sydney. It has sword-like leaves more than 1 metre (3 ft) long and it grows a flower spike up to 6 metres (20 ft) high. The apex of the spike bears a large cluster of bright red flowers, each 10 centimetres (4 in) across.