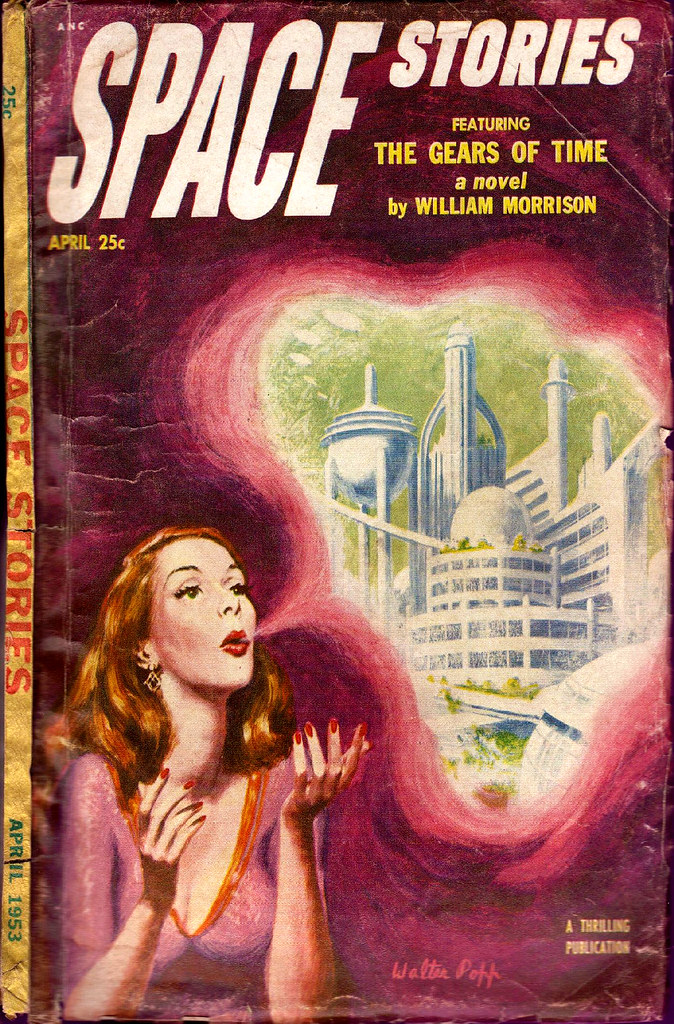 When I was young I loved sci-fi.

I remember one story — it was in Astonishing 365 or Fantastic Futures.

You see, in exchange for a year of unpaid lawn mowing I’d inherited a box of old sci-fi magazines from our neighbour when he left for the retirement home. There were dozens of them, tobacco-yellow paper, glue cracking, smelling of dust and lost ideals. Despite the out-dated science (we’d advanced so far since then) I reckoned them worth a glance for the cover art alone: sarcoline skies full of saucers, giant amazons born of monstrous atmospheres, a space girl in a titanium bikini draped insensible over some ravening fauna. Back then I’d try any antidote for my suburban boredom.

In the story I’m thinking of the crew of  spaceship Pluto X 5, engages its atom drive and a moment later pops out into complete blankness. Scanners scanned nothing, the nav system was snafu and they couldn’t call moon-base on their super-luminal radio.

And there was zero out the portholes, no nebulae, no super-novas. It wasn’t even dark just an undifferentiated ochre glow like flying through a bowl of custard, or that’s how I imagined it.

No matter what the crew did, accelerate fiercely in one direction or fly off in reverse, up, down, the same blankness was everywhere.

What had happened? Where were they?

They tried everything but finally, out of options and running low on fuel and oxygen they became resigned to their fate. At the last they gathered and solemnly prepared Pluto’s cryonic tubes for one last long dreamless sleep.

But just then with a bang and rattle space popped into existence. Good old outer space! There it was all about them in all its clamorous dimensionality: galaxies, stars, inky darkness and spirals of light. And then the radio sprang to life.

It turned out, as the narrator of the story explained, they’d travelled way too far, way too fast.

And sometimes you just need to wait and the expanding universe will catch you up.

Image: c/- Retrospace.org –  Thanks for reading. If anyone knows the details of the story about the ship that travelled beyond the universe, please let me know.

And here’s something ‘cheery’ from the 70s, Free with Oh I Wept

5 thoughts on “Self-doubt in the expanding universe”