…or buying flounder in New Zealand out of season.

(with apologies to Prufrock)

Let us go there, you and I
Where the salt marshes are spread out ‘neath the sepia sky
Like a poem anaesthetised on a page.
Hold quiet against restless thought
And memories returning again and again
Leading to the one inevitable conclusion.
Oh do not ask, ‘Where have they gone?’
Let’s find that place where the flounder run.

Winter and the water turns cold,
Polar flows along the east coast and
the flounder are gone, some say, to warmer climes.
Or looking up (always) from a sandy bed
perfectly disguised, they watch
the coming of the wash and foam
taking only a worm or passing prawn
in an explosive instant,
otherwise inert, a pair of pebbles on the sand,
The flounder waits, hibernates.

Remember that year, that summer,
that one blessed afternoon.
Just one set. They say that the net
was in the water for barely an hour. A half?
No, it was less, much less than that.
You had barely sat down and behold
the net is full.
So now you must be hauling on a truck
or some new-grown reef (Out here?).
Stubborn bastard, you haul away,
‘til hands and shoulders burst and chest breaks.
Enough! You’re ready to cut the rope at last,
and lose the net (that’s another hundred dollars you don’t have.
gone to the stinking—)

Then you see them…

Though the boat is full,
loaded to the gunwales with
flapping gasping quadrangles
They keep coming,
climbing over each other, hanging head to tail
Some leap into the boat on their own.
So many you have to laugh, or yell
or praise Him in his ridiculous abundance.
‘No more,’ you cry with tears in your eyes.
‘No more,’ as you row home, the boat so low
you dare not turn. But no need, your course
is a golden tessellated path of flounder
lifting you up until you fall on the beach gasping.
Holding your sides for the sweetness of it all.

NOTICE
Flounder is ONLY available at certain times. Fishing in winter is difficult and can be dangerous. Please do NOT insist as refusal may offend.
Flounder pies * 200 metres (in season only)
No Flounder today.
Flounder
Fl [XXXXX]der
Closed. 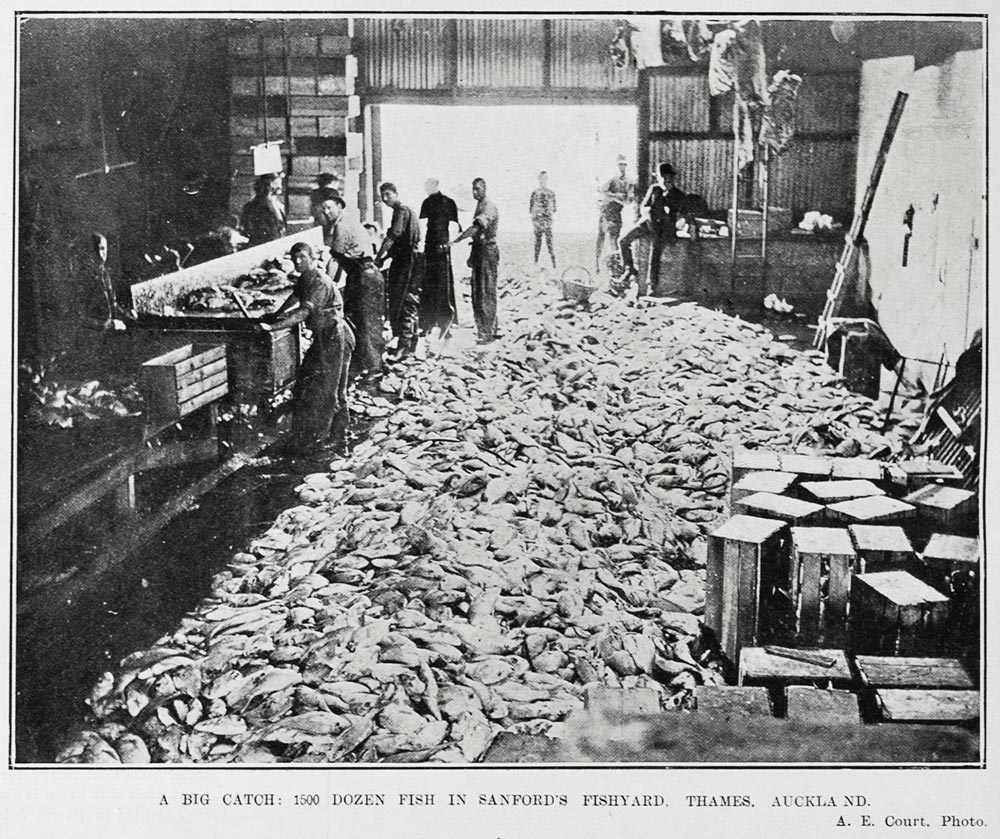 Old man Sandford’s cannery opened in Thames in the 1870s and was soon exporting to Auckland. In 1883 The Matuara, the first freezer ship, sailed for London with a consignment of flounder. These fish will go weeks over the horizon to land fresh on the table of Mr. and Mrs. Smith Esq. of Down-by-Sooty Lane, London ES1. No-one smiles for the camera. These dark-suited men, knee-deep knew that this was serious, this was money, this was the future secured.

Summer is gone and storms blow across the firth.
The fleet – the few that remain – are anchored in mud for weeks–
the Lucky Marie, The Capstan, and the Thames Star of the Sea.
The fishers chip paint or drink or pick fights with their wives or the stranger in the mirror.

Some take a dingy out with a pole and a light
To string a net at their particular place
Hauling up stones and weed and oyster shells
That’ll open your palm like a blade.
To stare down into the black waters.

Hold quiet against restless thought
And memories returning again and again
But do not ask, ‘Where have they gone?’
Let’s find again that place where the flounder run.